Who Will Replace Robert Redford? I'm Not Sure

There are few stars that can match the longevity of a career such as the one that's been had by Robert Redford in Hollywood. Born in Santa Monica, Los Angeles in 1936, Redford, now 78, has been on the silver screen since the  early 1960's and has since evolved his style over 50 years on screen! 50 years!

Sine I was a kid I have enjoyed his films, from breaking the Watergate scandal in All The President's Men to gun slinging with Paul Newman in the Sundance Kid, tearing women's hearts out in The Way We Were, keeping audiences on the edge of their seats in Spy Game and capturing our imagination in The Great Gatsby.

So much has he been a part of our lives that when I was recently asked to make shirts for Robert Redford I pretty much cleared by schedule to ensure he got a perfect fit. Redford was in Sydney making a film and we were presented with his measurements and a tight window in which to get the work done. What made me nervous is that the selection of fabrics chosen by Mr. Redford were so luxurious that any mistakes would cost us dearly to fix. Nevertheless, I am happy to report back that the shirts were a success and only a small adjustment to the collar was needed to complete the order.

So, today I thought I would pay homage to the Robert Redford I have known since I was a kid. Here is a sample of the many looks that have been uniquely his over the years.

Posted by Unknown at 2:10 pm No comments:

The Best Shirt Maker In The Land!

When you get a customer that is happy, that's a great thing. When you get a customer who is famous and happy, that's even better. The last time I went down to see Alan Jones he was very pleased with his shirts and he's been so pleased in the past that I framed a few of his thank you cards. In case you can't read his hand-writing, let me help you ...

The best shirt maker in the land.

Happy customers are the only way we stay in business. 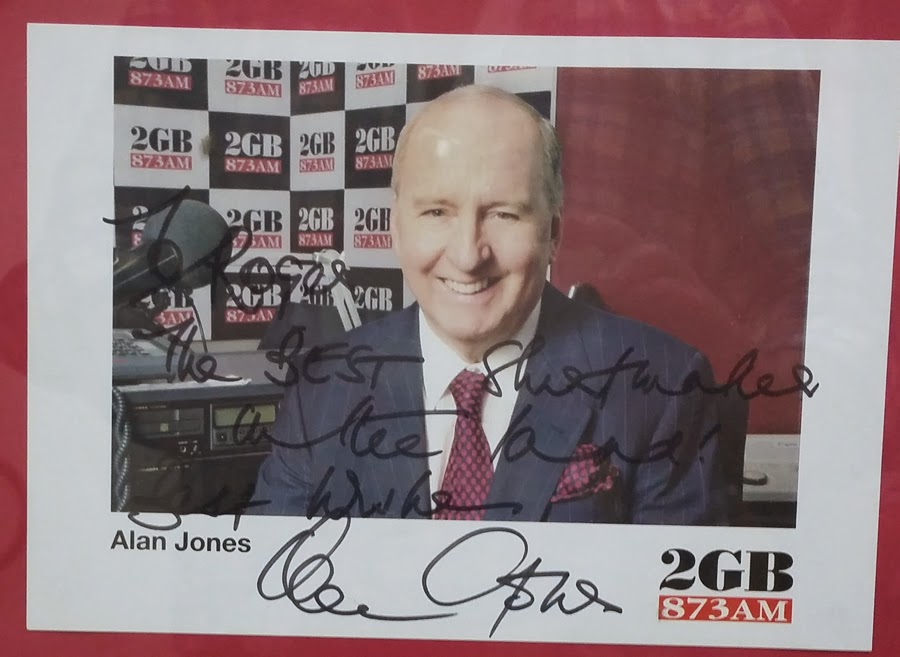 Posted by Unknown at 3:16 pm No comments:

In September the wedding season begins again and whilst we recommend a turn down collar for most black tie wedding events there are times, eg: white tie, when you need a wing tip collar. One of the better shirts we offer, although it's not cheap to do, is to make marcella bib dinner shirt with a detachable collar in both turn down and wing tip. This means you get the best of both worlds with one shirt! Too clever. So, if you want something like the one we finished this week for a very prestigious label in Sydney's east, then look no further than Studio Shirts where we can custom make your desired shirt down to the finest detail. 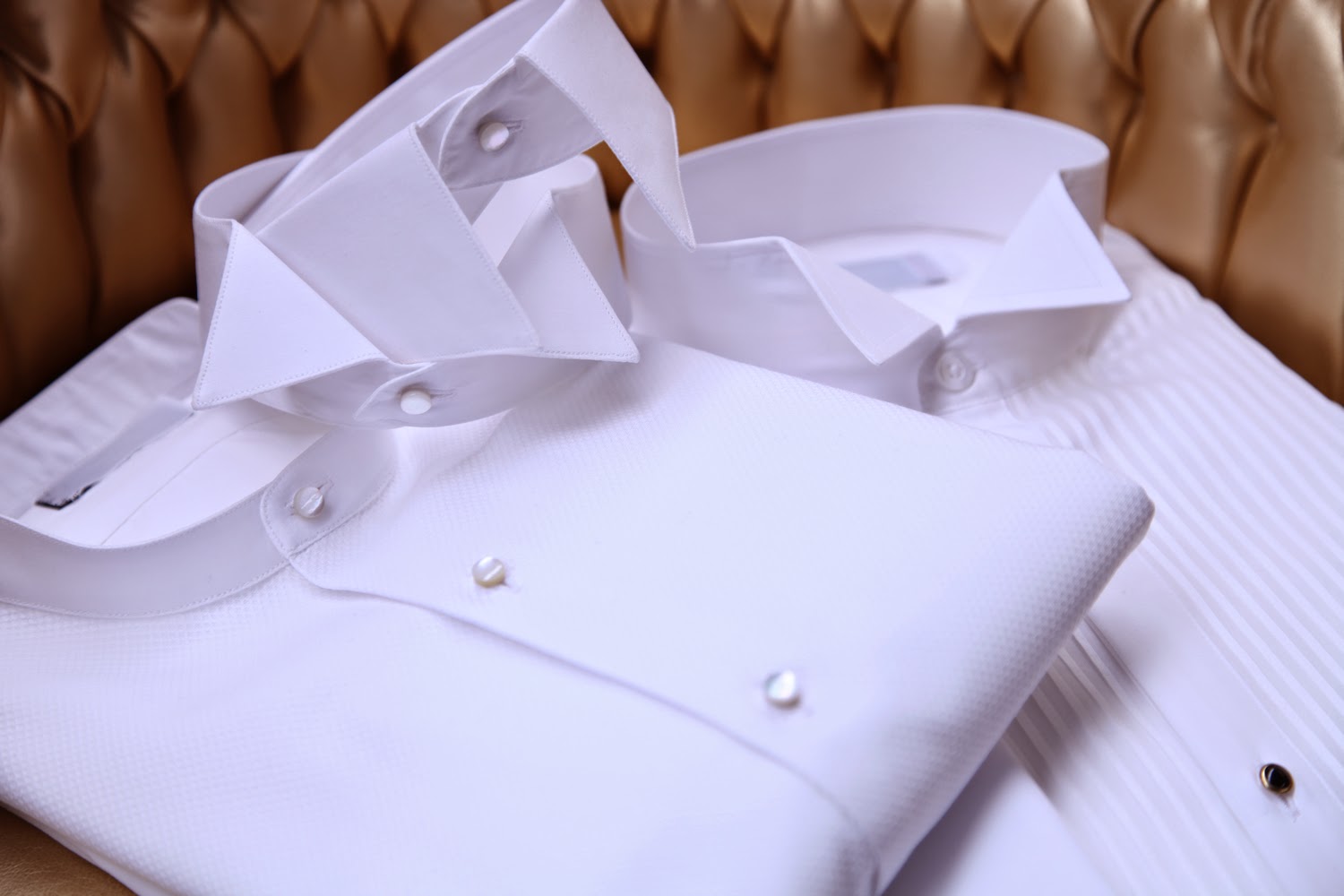 Posted by Unknown at 3:53 pm No comments:

Hello, Roger here, I know you think it's bloody cold right now here in Sydney and that you might even be filled with a little despair owing to the winter blues and how bloody mad the world seems to be right now - but wait - there's spring! Spring is a time of colour and a time when life renews so be ready, it's coming! And when it comes, brighten yourself up like a brand new flower with a bit of brightly coloured gingham in your shirts. Don't be depressing! It's time to see life begin again! 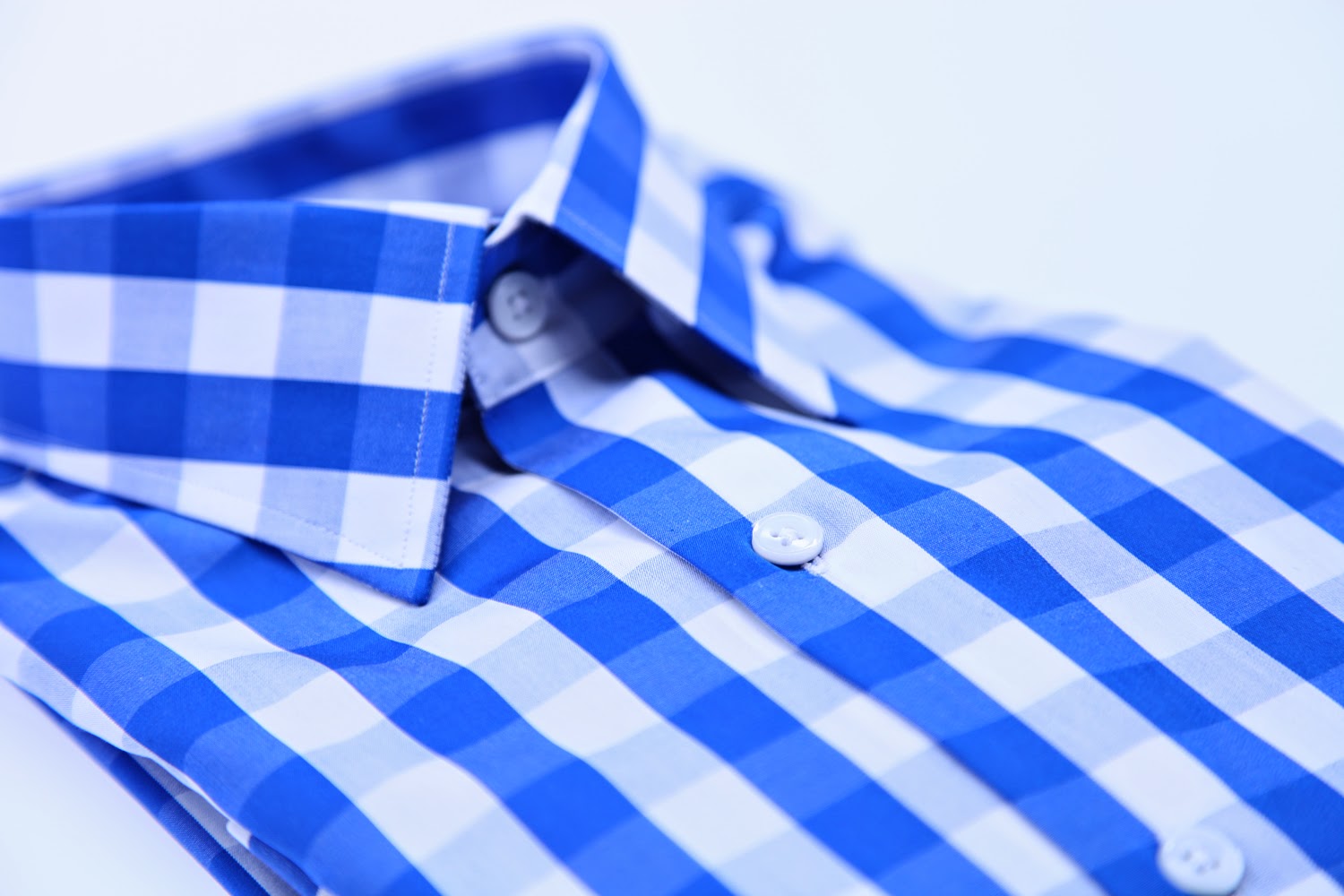 Did you know the derivation of the word gingham?

The name originates from the Malay adjective, genggang, meaning striped. Some sources say that the name came into English via Dutch. When originally imported into Europe in the 17th century it was a striped fabric, though now it is distinguished by its checkered pattern. From the mid 18th century, when it was being produced in the mills of Manchester, England, it started to be woven into checked or plaid patterns (often blue and white). Checked gingham became more common over time, though striped gingham was still available in the late Victorian period.

Posted by Unknown at 3:46 pm No comments:

There are loads of cotton shirting brands out there that make beautiful shirting. It doesn't have to come from Italy as most people think - there are countries such as Turkey that make cotton equal to that of many Italian brands. But, when you want the finer stuff and when you want the newer ranges you have to trust that the Italian brands will have what you want. Below are two such examples, the Monti 200 book and the Canclini bunch for 2014. Trust in brands - they know that they can't let you down more than once - that's why they're a branded cloth and not a generic. 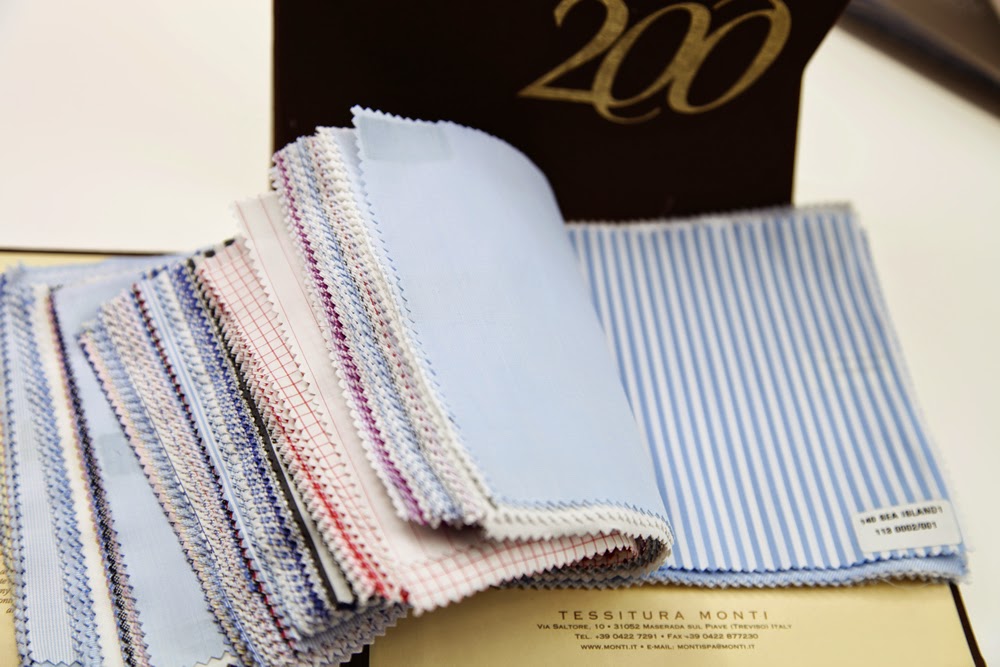 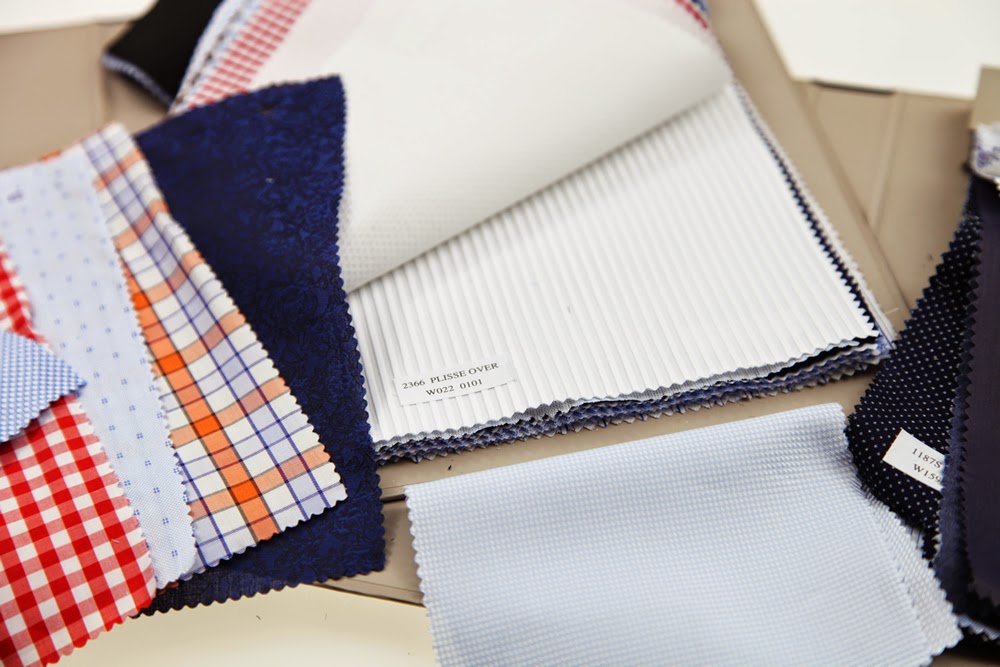 Posted by Unknown at 6:50 pm No comments:

The Oldest School Of Collars

Detachable collars come from a time when collars were very expensive to produce. In fact, fellas use to keep their collars in a separate box. These days with the way we consume things and then throw them away, you won't find many detachable collars around. But we still make them for things like theatre, film and television for historic re-enactments and of course for barristers who have the occasional use for them.

If you want to create something really old school - come see us at www.studioshirts.com.au 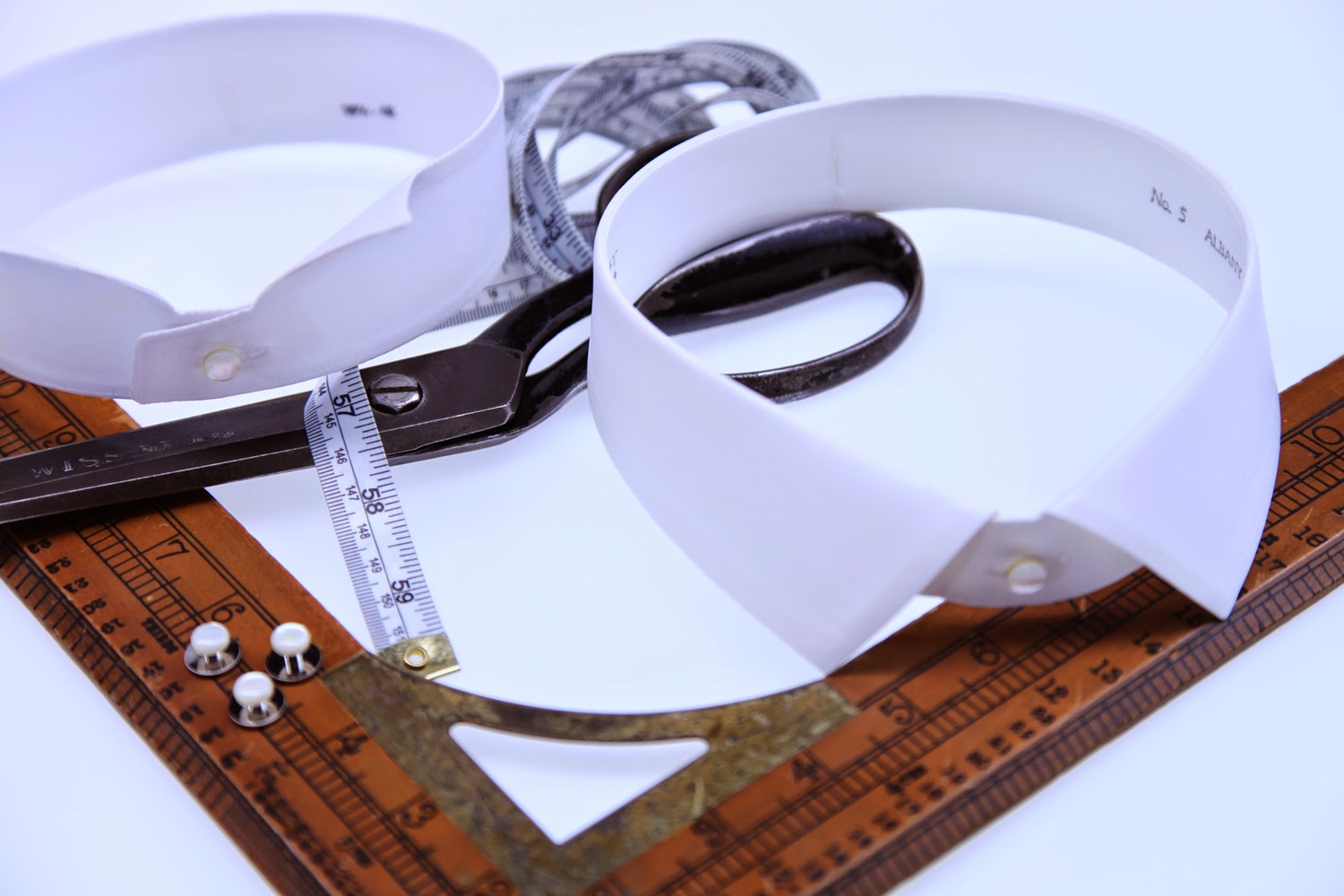 Posted by Unknown at 6:31 pm No comments:

Apart from doing work regularly for television stations like Channel 9 we occasionally get to work on some fabulous items for film, theatre, music and television. In the motion picture arena in the last three years we have made shirt for High Jackman for the set of Wolverine and we also made the shirt below for the set of The Great Gatsby as worn by Leonardo Di Caprio. We also make shirts for orchestras, plays, opera and much much more. If you are in media or the arts and need something knocked up, something Australian made and with a pair of dedicated shirt specialist looking over the project, look no further than Studio Shirts - www.studioshirts.com.au

Posted by Unknown at 6:24 pm No comments: